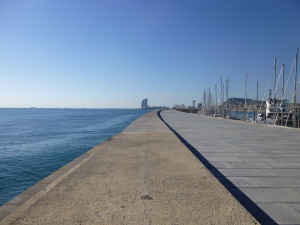 I love a beautiful view.  Nothing makes me happier than gazing at scenery that stretches as far as the eye can see; it gives me an amazing sense of freedom and relaxation, a feeling that all is right with the world.  Add to that clear blue skies and my blissful smile gets just a little bit wider.  So when I was feeling particularly blue myself one weekend I wondered what would pull me out of my metaphysical funk and give me the boost I needed to shake off the remains of a generally crappy week.  The answer in the end was sunshine and space!  After spending the morning cycling along the coastal path down to Villa Olímpica, and eating my breakfast on the port, just sitting and looking out to sea, that afternoon I decided I wanted a different view.

So I decided on the Collserolla Tower, not really in the mood for the tacky theme park at Tibidabo, I figured the tower and the woods around it would be the nature fix I needed.  After a quick bicing ride to Plaça Catalunya I hopped on the local train and headed up to Peu del Funicular, and then from there took the funicular to Vallvidrera Superior, as it looked on the map like the closest stop to the tower.  I suppose with more research I could have confirmed this, but I’ve never been a stickler for details when it comes to an adventure!  And an adventure it was, climbing higher and higher above the city, occasionally glimpsing a snippet of the skyline below, but mainly just blindly climbing upwards, guessing which street was best to take, simply because it rose higher than the rest!  Finally I was rewarded for my endeavours and looked out across the sprawling city to the blue sea beyond.

But I still wasn’t as high as I could go!  At this point I felt a need to keep going, well I’d come this far, what was the point in turning around now?  I clambered up a pathway that seemed to lead to the Collserolla Tower, which actually led me behind the tower, but allowed me to get close enough to appreciate its size and impressive dominance which is visible for many miles around.  Had I made my trip just a week later I could have gone up the tower itself, but it was still out of season, so I made do with just wandering around the base.  Surrounding it, a maze of pathways and bike tracks run through the forest and parkland, to be explored another day.

And in the not so distant distance I could see the church on top of the other mountain peak, the Temple de Sagrat Cor, which was the closest I had ever seen it.  Spurred on by my now rampant sense of adventure I followed my instinct and fairly accurate sense of direction as it turned out, and found myself at the entrance to the theme park at the base of the church.  This was also closed as still out of season, although I’m not sure I would have gone in even if it was open!

Instead, I climbed the steps up to the church, went inside and paid my 2 euros to go up to the top level in the lift (guarded by the man who surely has the dullest job in the world) and looked out on the city again.  Still not quite at the summit I scaled the next flight of stairs, and the next, until I was at Jesus’ feet, at the base of the Sacred Heart of Jesus statue perched atop the church.  And then I was impressed.  Satisfied I had reached the highest point of the city, I looked out at the now tiny buildings below, and tried to put the landscape into perspective.  You really can see everything from up there.  Even the Collserolla Tower, so close by, seemed like it was far away, and the W Hotel and Montjuic were miles away.  And then I turned to see the other side of the mountain, to discover what lay beyond our sheltered home between the mountain and the sea.  Rolling hills, green and lush, and Montserrat in the distance.  Oh yes, these were the views I had been craving.  Definitely space.  Definitely nature.  Definitely stunning.

By this time, the afternoon was waning and dusk was drawing in, so I decided to stay and watch the sun go down from my vantage point.  Seeing the shadows grow longer and hide the sun from each corner of the city I got a true sense of how big Barcelona really is.  And how beautiful it is.  Ah yes, my head is definitely in the clouds, but my heart will always be in this city.

The trip is slightly off the beaten track, although I’m sure in the summer many more people make the pilgrimage to the church on the mountain, and it is certainly worth it.  And for those of us on a budget, I spent less than 4 euros on my adventure.  2 journeys of my T-10 transport card, just under a euro each, and the 2 euros lift fee to reach the church’s upper level, now if that isn’t a bargain, I don’t know what is!  I had a splendid afternoon, satisfying my desire for adventure, space and fresh air in one fell swoop – and my funk was well and truly forgotten.